Finally, somewhere along the line, The Bard Rocks decided that he loved his non-Irish music too much not to share it with as many folks as he could. Yes, there were others that were better singers and some are better players, but, doggone it, they weren’t out there or if they were, were so expensive that most regular folks would never get to hear them. This stuff is just too good to have it be forgotten or get moldy. So another career was launched. A card at a music store led to a playing acquaintance with Bill Ackerbauer. They played together once in a while, and quickly discovered that age differences were overshadowed a near perfect similarity in their old time musical interests. So, in 2006, they formed a duo, The Bentwood Rockers, and have been busy ever since playing old time, Piedmont blues, and hokum music. The Bard Rocks now gets the chance to show audiences what is it is about these old neglected songs that makes him love them so much. And he gets to tell someone else besides his wife all those jokes and stories. She refuses to laugh; but his audiences don't have that problem!

And he continues to read liner notes.

A school teacher upon graduation, he picked up his first Martin guitar and later began playing autoharp, an instrument he could play melody on after only 5 minutes of practice. They don't call it "auto" for nothing. After grad school, he graduated from college songfests as well and entered a period of basically what amounted to hiding under rugs and playing in closets when no one was around. Dairy farmers don’t have much time to play music with others, but he did join the North Country Fiddlers and worked once in a while on stage as an accompanist. Later on, mandolin was added and the fiddle was started, then quickly abandoned. Nothing sounds so beautiful as a violin properly played - and there is nothing worse when poorly played. He couldn’t stand to listen to himself!

When he moved his farming operation to the Mohawk Valley, he discovered a richness of folk music that, until then, he had only dreamed about. Oh, how wonderful were those nights at the Old Songs Festival or Caffe Lena. Then, The Bard Rocks met the PSG (Pickin’ ‘n Singin ’ Gatherin’). Now there were other amateurs and semiprofessionals to play with! Momentum gathered. Banjo was added to the mix. He began to host get-togethers at his house, which continue to this day.

When he sold his Johnstown farm in 1999 and moved to his present location in Sprakers, he feared losing his musical community. But the opposite happened. In his fear, he searched deeper and further. Trained since college to always read bulletin boards, he saw a card for an Irish group. “Hey, I like Irish music.”, he thought, “Maybe I can get together with them!” So he called. The reception was guarded, but they finally said to come on over for a practice. Oh, embarrassment, this was a group that sometimes performed for real (like, green) money and he had just implanted himself into their band, unasked and unexpected. And they permitted it! Now, he's the leader. Looking back at a distance of quite a few years, that chance marriage of The Bard Rocks and the Valley Bog Players has been a good one for all parties, and has been a marriage that has lasted. He also began to find more venues to play and also to listen. A week’s stay at the Ashoken Music Camp gave him additional experience and contacts. 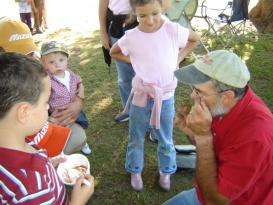 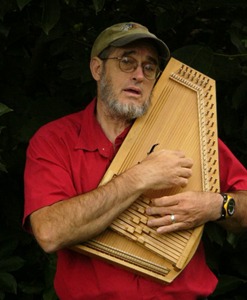 Then, when he was 14, an epiphany! He attended a Bible camp at Haverford College. What did the kids there do for fun? They had Hoots! And they were a hoot, too. Until then, he had strictly avoided singing. Never, period. Here’s how far this went: his 4th grade buddies hated him one fine spring day as Mrs. Jones had insisted that the class could not have recess until each one of them sang a song. This progressed fitfully, until it was his turn. It became a battle of wills: The (adamantly silent) Bard Rocks vs. Mrs. Jones. No recess that day.  Anyway, at age 14, he finally discovered that singing was fun. With the crowd singing lustily, no one could hear him, so it was safe.  When he returned home, he had to get a guitar. Non-musical parents caved in, supportive as ever, and a cheap Kay archtop showed up, not quite what he had envisioned, but beggars can’t be choosers. He began to teach himself to play with the help of a (yes) comic book that had folk songs and some chords in it. You could get stuff like that then. The local bus station had them, and some folk song books as well, all in the magazine section. He hung around the local music store, bought cheap records whenever he could find them ($4 for an album was a luxury for the rich, folks who had jobs; his limit was $2). He never missed Hootenanny on TV, and was convinced that when he finally got to college, there would be people playing folk music in every corner. Turned out, it wasn't like that at good old U of D, but he did find kindred souls in the Outing Club and began leading songfests with them. He wrote research papers on folk music, did a lot of scholarly reading and listening at that time, a practice he continues today. Add some courses in music appreciation, 8 semesters of concert band and some classical music opportunities. Actually, a large portion of his musical education, whether it be folk, jazz, or classical, came from the back of album covers! He reads every word.

In 4th grade he took up the saxophone and played in the school band for the next 8 years. It was bad, but he stuck to it. In college he found the Concert Band was more what he was looking for, a more professional quality, with a demanding conductor. But this band was already too highly saxed, so at the director's request, he taught himself bass clarinet. What this means is that the Bard is musically literate, something Ms. Cathcart Bennet, the local elementary music teacher, learned to her surprise. Accustomed to giving him the gentleman's C (she gave only 3 grades: A to most everyone, C to those that she had no hope for, and F to those who hassled her), she had a semester of teaching everyone to read music. Having already done that for 2 years, reading music was a piece of cake for The Bard. Does he read tablature? Of course not. But we are getting ahead of ourselves.

The Bard Rocks Musical Education  -  fun to read perhaps,  but more than you ever wanted to know

So, who does he copy? Who does he sound like? Well, ...... he sounds and plays like... hmmm.... like The Bard Rocks. He has never wished to follow in another’s footsteps, or to imitate, though sometimes he has wished that he could. His playing can take on the ragtime bounce of John Hurt, the thumb-led melody of the Carter family, or whatever, but it is always somehow his own definable sound, its sophistication submerged, never so polished that it loses rough-edged authenticity. He takes what he likes, what strikes him in both the ear and the heart, and adapts it into something in his own style, but fully in keeping with the music’s original feel. He might come up with a take on it that you have never heard, but it will still sound old. 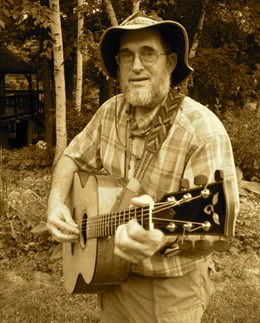 In college, Peter Leavens, a professor of geology, introduced him to Old Timey music and to the New Lost City Ramblers. This naturally led to the bands from which they learned their music. He was already familiar with Doc Watson’s phenomenal playing and relaxed singing. Everyone talked about how influential the Carter Family was, so he gave them some study, and liked what he heard. Somewhere along about this time, he started listening to the Clancy Brothers & Tommy Makem, and Irish was added to an increasingly eclectic mix. College studies had familiarized him with the damsels and snow white steeds found in the old Child Ballads. By grad school, he and the rest of the folk world had discovered Mississippi John Hurt. He looked further and found a plethora of old and little-known blues and ragtime players, then came the yodeling of Jimmie Rogers. Some of the older country songs began appearing in the mix after a friend gave him a tape of Hank Williams. He had long listened to country music, as the only radio station he could find while doing the midnight milking was a country one out of Canada, but it was Hank’s music that got him playing it. A concert by the Riders in the Sky and a friendship with Sean Blackburn and Liz Masterson led him to rediscover cowboy music, which led in turn to western swing. And the old-style gospel has sort of always been there from childhood on, its place firmly cemented because it is just so... so singable. Humorous songs were popular with the college Outing Clubs that he first sang with and will never be far away from him.

The Bard Rocks began by listening to Hootenanny, the TV show that was so popular in the 1960’s at the height of the Great Folk Scare. He'd stay up to all hours on Saturday nights searching the dial on a 40 year old radio for stations all over the US that played folk music. He bought a bunch of folk song books and started learning songs from them. If he had never heard a piece played yet, he figured out something that sounded right to him and did it that way. Then there were the recordings by the Kingston Trio and the other pop folkie groups of the day. Junior Wilson, whose parents owned the local music store, turned him on to Bluegrass. By college, he began to explore source music, either old recordings of those who had learned their music by listening to the old folks in their families, or field recordings made by ethnomusicologists. He still listened to modern singers but, as they were breaking away from tradition, he moved stronger in the other direction. A song had to have a history of oral transmission for him to be really interested. Nothing has changed, but in recent years, he has broadened his horizons - guardedly - to embrace certain well-written modern pieces, without a sacrifice of his love of the old songs and pieces. But if you could look at his voluminous collection of recorded music, you would see that old recordings, "source music" if you will, predominate.That's the short story.The long one continues below. 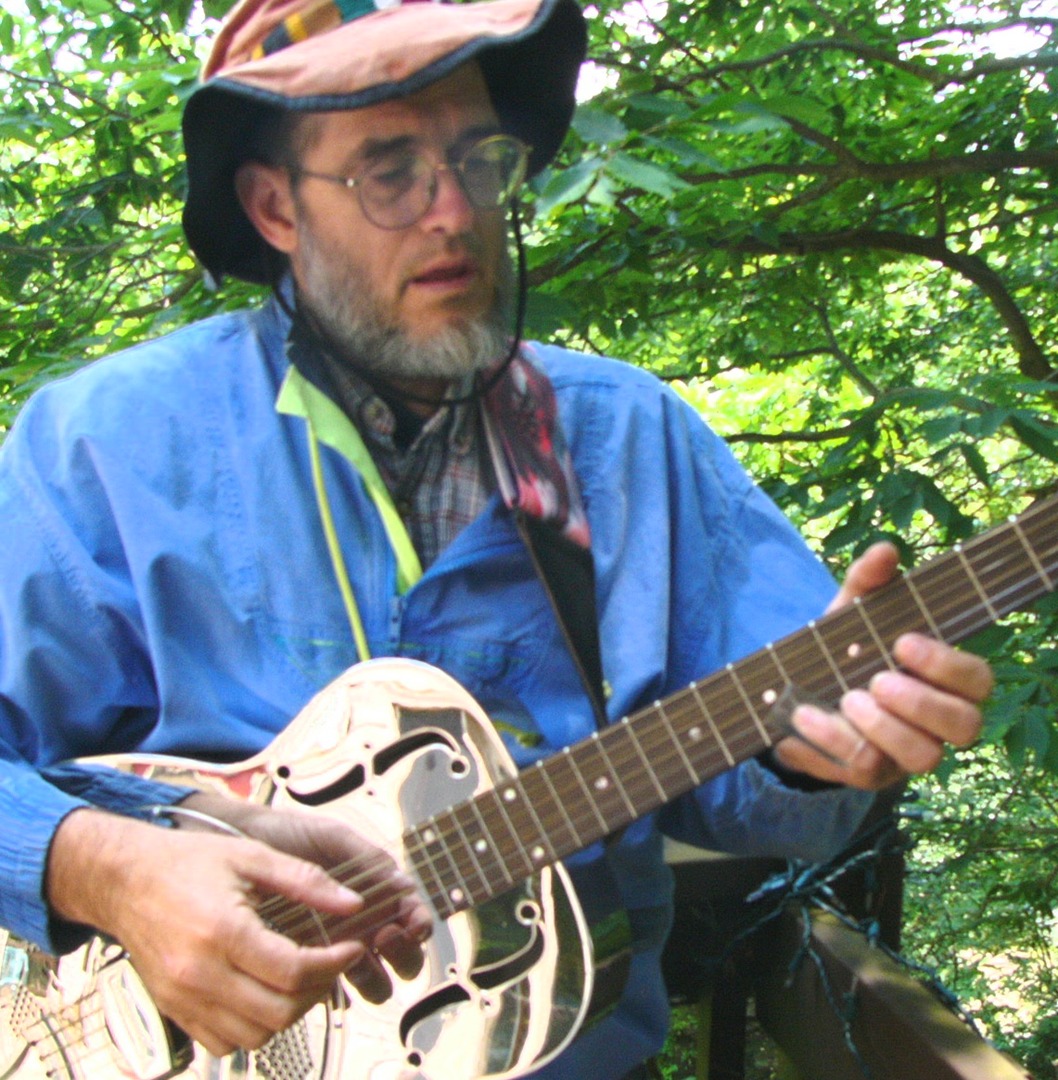