Custom-crafted, featuring a soundport, a folding "Voyage-Air" neck, a very dark Macassar Ebony back & sides and a Millenium Sequioa top. The top was salvaged from a deceased tree which stood on a college campus, it's center filled with cement. The mineralization of the cement and the massive weight of the tree contributed to the unique sound and amazing look of the top. In  a lower tuning it sounds almost resophonic.

A one-of-a-kind body, larger than normal, but not too much, this has an Australian Blackwood back, sides and top, wonderfully figured. The gold resonator plate has lyre vents, a theme which is echoed in the inlay as well. This 13 fret model is the first Mike has made - but not the last. He plans to make others using the same body shape with the 13 frets. The frets are EVO and the tuners are locking Grovers. It has a wonder warm tone, definitely with the true resonator sound but with the harshness gone. And of course, it plays wonderfully.  It features a blue Abalone purfling and Tortoise binding.. 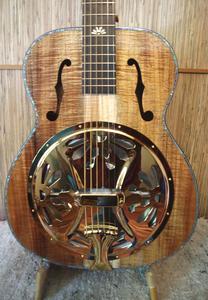 Custom handcrafted by Roy McAlister of Washington State, this baritone is most often tuned B to B. It features a radical Bubinga back & sides and an Adirondack Spruce top, with Celtic inlays in the fingerboard. It plays just beautifully and sounds great in any position on the neck, though it's the round and deep low end that sets it apart.

This has all the funk that you could ever ask in one guitar. It ain't pretty, but it's seen it all.In 1931, these sold for $27.50. In unchanged condition, it would be 100 times that today. Only this one lost the "Duco" finish somewhere along the way. And at the same time, it acquired so much mojo that it could stand on that alone. The old Blues players liked them because they were cheap and didn't break easy in barroom fights.And they were loud.

Hawaii-made of a rare Fiddleback Mahogany back & sides with a Port Orford Cedar top, it does everything really well. Play this and you realize why James Goodall's reputation is so stellar.

Custom handcrafted by luthier Nick Apollonio of Maine, this 12er has a Myrtle back and sides and Port Orford Cedar top, both American woods. The Neck is Maple, also American, and it features a sound port, and an Ipe (Lapacho) fingerboard and saddle. It has that great 12 string sound and it more than pulls it's own weight when performing solo or recording..

The Bard loves guitars. When you play, you feel better afterward. A guitar is a work of art that helps create other works of art. There is no instrument so beautiful; some say they mimic a woman's curves. Guitars don't care about politics, religion, the economy -  all the stuff folks get het up about. They don't care if you play another guitar. Music, tone, rhythm, harmony, along with an incredible range of sounds and emotions - it's all right there, and way easier to lug around than a piano. They can be simple to play and yet you will never be able to master all they are capable of doing. Unlike people of the opposite sexual persuasion, they are never high maintenance, don't ask you where you were last night, no license needed, are always ready when you are in the mood, and they never make a sound unless you want them to. And a guitar has a history, a long tradition of being a "people's instrument".

​ This features an extreme bearclaw Sitka Spruce top and "bacon" Padauk back and sides, with a figured Maple neck with a cross-grain Padauk center strip. Amenites include EVO frets, a soundport, custom orchid inlay on the headstock and at the 12th fret, and a carved "pillow" headstock, with Padauk on both sides. Macassar ebony fretboard, bridge and tuner knobs + African Blackwood bindings. It was designed to be an all around stellar performance guitar and it hit the mark.

Made without molds by California's Bruce Sexauer, you'll never see another like it. The top is Adirondack Red Spruce, but the back - Southern Magnolia. Headplate, bridge, and bindings are Amazon Rosewood with a Koa stripe. This is a 13 fret model, with a sound port, a Manzer Wedge, EVO frets, hide glue construction, dovetail neck joint and a varnish finish. It ends up as an amazingly well-balanced guitar, smallish, but has ample bass . It is used most often in solo work.

Custom handcrafted with a Ziracote back & side and an Adirondack Spruce top, Curly Ash bindings & neck with a custom Celtic inlay, and Ziracote pyramid bridge, this 12 fret OOO by John Kinnaird of North Carolina has lush and warm overtones and sounds especially good on those slow pieces. 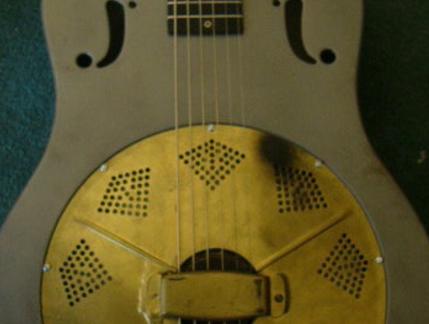