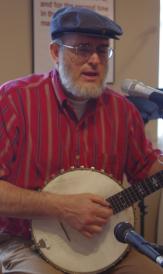 This is The Bard Rocks, more like  a person.  See the difference?  (He can't, he's blind here too.)

This is a Barred Rock hen. That's like a chicken. 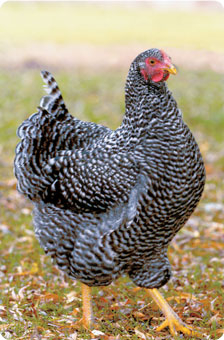 What is all this Chicken business?

No, The Bard Rocks does not have a thing for chickens, though he has kept them at times. See the hen at the top and also to the left? What breed is it? Don’t know? (oh, you city people)  Barred Rocks, sort of a Plymouth Rock style of chicken, good layers, and also meaty. Can't pass up a double pun. (Does that mean The Bard Rocks is a both good lay and meaty... oh oh,  let's not go there, that's not even punny.)  Just for fun, you may hear a chicken song or joke.

The Bard is also a bit of an ethnomusicologist, so you may expect to learn something as well as be entertained by his songs and his humor. His goal is to communicate a love of these authentic old songs, and in doing so, he may tell snippets of their origin, the first singers, how it relates to other songs, and also learn about the old and unusual instruments which he uses. WithThe Bard Rocks as a stage name, he likens himself to the bards of old, traveling poets & singers, as well implies raucousness & hi energy. 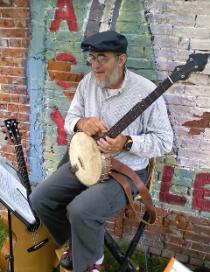 The songster, Roland Vinyard, known as The Bard Rocks (or is it The Barred Rocks?), has taken his act public after 40 years of playing in closets, under rugs, whenever he thought no one was around. Infamous for protest songs (when he sang, everyone protested), The Bard now specializes in the songs of the acclaimed songwriter Trad. Anon. If you don’t know who wrote it, he might know it. His vast repertoire is sort of a General Eclectica, mostly very old and/or traditional - or at least they sound that way. Check out the "Repertoire" page to see just how wide-ranging this is. Many songs feature choruses: he loves the audience to join him.  And he makes sure there is some humor; we all need to smile and laugh. 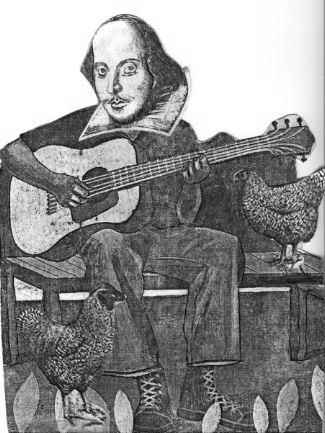